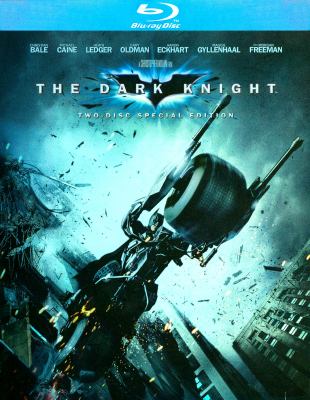 Blu-ray Disc.
Title from container.
Based on the characters created by Bob Kane.
Originally released as a motion picture in 2008.
Special features: An inside look at the creation of the movie with director, Christopher Nolan; 2 separate documentaries exploring the psyche of Batman and his arsenal of weapons; digital copy of the film; and much, much more.
Gary Oldman, Christian Bale, Heath Ledger, Michael Caine, Aaron Eckhart, Maggie Byllenhall, Morgan Freeman.
As Batman sets out to destroy crime in Gotham, the Joker thrusts Gotham into anarchy and forces Batman closer to crossing the fine line between hero and vigilante. Includes over 3 hours of bonus material featuring an inside look with Christopher Nolan.
Rating: PG-13; for intense sequences of violence and some menace.
DVD, widescreen presentation; Dolby Digital, Dolby True High Definition.
This is a Blu-ray disc and will not play in a standard DVD player.
English, French, or Spanish audio; English, French, or Spanish subtitles; English subtitles for the deaf and hard of hearing.